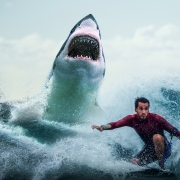 Nurses and other emergency responders see some of the worst that humanity has to offer.  Whether the trauma is caused by a natural event or human cruelty, the impact cannot be overstated.  When you experience a trauma first- or second-hand through working with those who are injured, and you see awful things, your mind and body experience it as stress, which can either trap someone in a cycle of stress or create an opportunity for growth.

Stress at the right time and in the right amount is a very helpful thing.  It helped our ancestors focus their available resources into the immediate moment to escape lions on the plains of Africa.  It’s our body’s way of shutting down long-term investments to address immediate and pressing needs.  Stress is what happens when our brain perceives a threat to our survival.

The problem is that our brains overuse the stress response.  Instead of being limited to predators, we use it when we worry about our job, our mortgage, our kids, or a thousand other things that aren’t an immediate threat, but we perceive as threatening.  Our minds make no distinction between what is imagined or envisioned and what is real when it comes to the activation of the stress.  We’ll get our heart racing during an action movie or a good book even though we’re personally in no danger.

Seeing the worst humanity has to offer is stressful to us.  It’s stressful, because it punches through the defenses of our ego and makes us realize how vulnerable we are.  If this can happen to someone else, it can happen to us – or someone we love.  Losing someone we love is a stressful event because we must reorient ourselves to whether we can survive without that person.  Either way, seeing someone else be harmed can be perceived as a threat to our survival.

What is sometimes called secondary PTSD or secondary traumatic stress (STS) is an expression of our stress at perceiving someone else’s continued suffering.  It creates a stress on us through our ability to imagine ourselves in their circumstances.

Most people are only familiar with post-traumatic stress disorder (PTSD) and the challenges it creates.  However, there’s another possible outcome from stress, which we’ve all experienced to some degree, called post-traumatic growth.

We’ve all experienced forms of post-traumatic growth.  When we exercise, our muscles respond to the trauma by rebuilding themselves stronger.  Martin Seligman in Flourish explains that 90% of West Point cadets he surveyed were aware of PTSD, which he describes as relatively uncommon, while only 10% were aware of post-traumatic growth, which is more common (Seligman, 2011).

Most growth processes require some sort of trauma to kick them off.  The trick is that there must be a capacity to grow from the trauma, which requires that the trauma be the right kind, in the right amount, and at the right time.  Too little, and we take no action; too much, and we can’t recover; too frequent, and we don’t have time to rebuild before the next trauma.  Nassim Taleb wrote Antifragile to explain post-traumatic growth.  It’s all about how to grow from trauma instead of break (Taleb, 2014).

When people are subjected to the wrong kind of trauma, at the wrong amount, or at the wrong time, it creates a lasting sometimes even permanent impression.  It shapes the way people respond to the normal, everyday “slings and arrows” that we all face.  Those with PTSD respond more intensely to threats – in effect, they’re constantly being bombarded by their brain telling them they’re vulnerable.  It seems that patients with PTSD have a hippocampus that is overly sensitive (Sapolsky, 2004). The solution to clinical PTSD is to work on downregulating that sensitivity.

In the 1960s Martin Seligman and his colleagues including Steven Maier published on a concept they described as learned helplessness (Seligman, Maier, & Geer, 1968).  The dogs were conditioned with mild shocks and no way to escape.  When they were later put in a position they could escape, they wouldn’t even try.  Decades later, Steven Maier and his colleagues utilized fMRI to discover that it wasn’t learned helplessness at all (Maier & Seligman, 2016).  Helplessness is the default condition.  Instead, we learned a degree of control, and this downregulated the sense of panic when confronted with a stressor.

Albert Bandura was famous for his desensitization training which he used to effectively cure patients with phobias.  The patients were placed in safe conditions and were moved psychologically closer and closer to their fears – while maintaining the perception of safety and discovering their self-efficacy (Bandura, 1977).

Stress and the Stressor

As we seek to better manage our stress, we need to apprehend our assessment of the stressors and evaluate their capacity to truly harm us and our resources for compensating.  The more we can focus our assessment on our own capacity and the support we receive from others, the less stress we’ll feel and the more likely it will be that we’ll experience growth rather than developing a disorder.